ionizable because gawddayum, its been a long time since I did one. 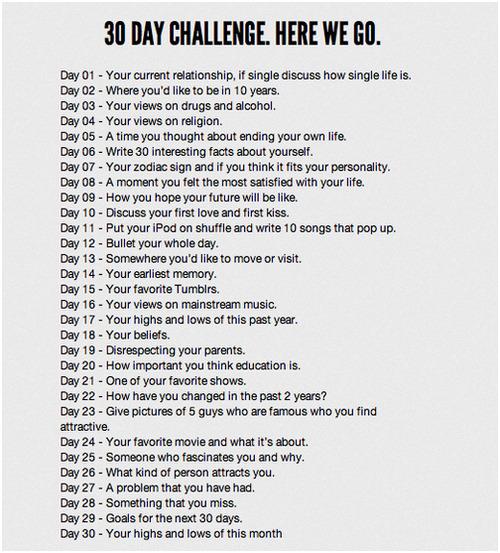 Day 01 - I am single as a solitary pringle. Always have been up until now. Never dated, never made out with someone, the whole shebang etc. I did get asked out on a date once but I did not like the dude in question so I told him I had an exam. He suggested another time and day after my exams were done but I prevaricated because I refuse to go out with people who do not make me feel comfortable and this chap, who was my next door neighbor by the way had this knack of making me feel supremely uncomfortable. That was way back in the 12th grade.

The thing is I studied in a all-girls Catholic school and a all-girls Catholic convent. So as a result, I didn't learn how to interact with people who were not ladies and I was absolutely terrified of dudes. I couldn't even look them in the eye, let alone say a word or two to them.

But when I went on to do my post-grad, I decided it was time for me to pull-up my boots and get to interacting. The first few months, I was floundering but after that I managed and now I can look a dude in the eye and talk and have two excellent dude friends. Ooh, and postgrad too was where I developed some serious crushes (one only and lmao, I remember once me and friend were hiding in the bushes and checking this dude out.). I never made them progress beyond the point of a crush though because, one - no guts, two - or rather more importantly, I realized I do not do casual. I'm either all in or all out. I tend to be more invested than the other person and that way only lies to disaster.

I am also the person who when they crush pretends that the other person dosen't exist. I can't help it because my face is terribly expressive and if I had to look at the person I was crushing on as I passed by, my face would be the death of me. Hmm. I do need to find me some courage. At least acknowledging the other person is there would be a start. :D

I also feel compelled to admit that despite having no relationship expert whatsoever, I am the person who apparently doles out relationship advice and good advice at that. :D
Collapse